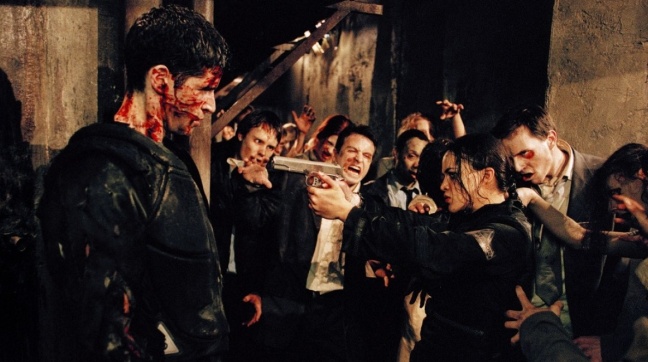 I shall be digging deep into the heart of Resident Evil to see what makes it tick. I will lay to rest its myths, unearth its plot, and resuscitate its mystique so read on only if you have already seen Resident Evil or don’t plan to.

0:02:50 Whoever designed a lab that treats Biohazards with an air vent that leads to every other room in the building missed a very important class in Architect School.

0:04:40 The virus is released into the lab. Best ever beginning to a zombie movie (including The English Patient).

0:08:17 One of the few films where crawling out of a lift stuck between floors actually halves the human. Narrow capture.

0:08:53 No woman, not even Milla Jovovich, would make that much of an effort to hide her nudity when she wakes up from a coma. on the floor of a shower. totally alone.

0:13:15 Whenever I watch an action film, I look for this moment when Special Forces come in through the windows to the sound of heavy metal music. This moment created a yardstick by which I judge all action films.

0:16:54 A crack team with elite training whose members hear noises in a hostile environment and tell themselves ‘Must be my imagination, even if I heard it three times. Not worth mentioning to the rest of the team’? That’s the wrong kind of crack.

0:32:49 Killer scene with the lasers and body bits that slide off like Michael Jackson on a windy day.

0:33:14 On the other hand, why does the laser get more and more difficult to avoid? Wouldn’t it just start out at the mesh level to eliminate everything the first time?

0:34:34 All the people were made into diced cubes, so why is the pulse bomb they left in the bag in the hallway still in one piece? WTF!?

0:36:56 The genetic monsters in the mechanical cocoons are reminiscent of Aliens. Time to play… Homage or pillage?

0:45:42 One of the paramilitary was eaten alive… and not in the good way. It might have been the leader, but honestly all the men in this movie look the same–it’s as though the casting director only employed men that reminded her of her daddy.

0:47:36 Oh yes, the devil dogs. This film actually follows the video game quite closely. Like a devil Doberman.

0:50:23 More great heavy metal and slo-mo action… What more could you ask of something that has no hands?

0:51:42 He took the time to read a woman’s name on her badge out loud. This means we shall be seeing said woman as a zombie sooner rather than later.

0:58:54 Rather boring description of the bad science behind the zombies and we didn’t even ask for it.

0:59:33 Granted this is one of the earliest new zombie films, but it took them this long to learn they need to shoot zombies in the head to kill them?

1:01:17 Michelle Rodriguez is at her sexiest when wielding a weapon. If I were her, and sometimes I pretend I am, I’d be packing wherever I went.

1:14:08 Her fake husband was the bad guy. No surprise there. If someone’s going to betray you, it’s probably going to be your spouse. #Innit

1:17:03 Pop quiz: You’ve been bitten by a contagious zombie but you have the antidote loaded into a syringe pressed up against your arm and you hear a noise. Do you take the half second and finish injecting the antivirus or do you stop everything and risk falling prey to the disease because you’re curious? There you go being smarter than the movie, too.

1:27:09 Nicely done, if a bit routine, fight against the tongue monster. Again, the soundtrack is amazing. As is the tongue.

1:32:31 Alice wakes up alone and can’t see the zombies on the other side of the two way mirror. The film that can’t stop ending…like a zombie?!

1:34:01 We see Raccoon City devastated, then cut to credits.

In the Comments section, write a caption for this photo to win unbelievable prizes. Seriously, you’ll win and you’ll say, ‘I don’t believe this shite.’

There was an error retrieving images from Instagram. An attempt will be remade in a few minutes.