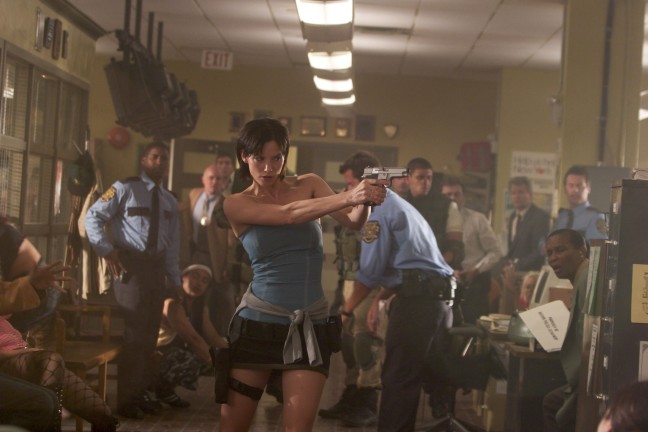 0:02:22 The film begins before Resident Evil ends because at the end of that first one, Raccoon City was devastated but here it’s business as usual.

0:06:31 Have you seen Jill Valentine’s police uniform? To quote Sir Mick Jagger, ‘She make a dead man come.’ (And in this film, that could happen.)

0:11:15 In a daring rescue, a hero rescues a girl who was bitten but she knows what it means to be bitten, so she jumps off of the skyscraper. Once bitten, twice die.

You do what you have to do, I’m staying,

–says the scientist in the wheelchair

Why is no one laughing, because he must be joking. If some goon starts pushing the wheelchair into a plane, it’s not as though he can get up and run the other way.

0:18:34 A lot of time is taken to show Alice was experimented on before she escaped. Flashbacks are also zombies, eating the brains of this film.

0:20:02 I’d forgotten about the weather girl with the hand cam that has unlimited recording capacity and never runs out of batteries. In 2004.

0:23:45 More attempts at suspense than action, and unfortunately they’re as lame as a one-legged zombie.

–says man who escaped police station earlier, as he runs over zombies in his large American car

Cute video game reference in a film based on another video game. Like Inception, only fun.

0:27:27 Topless streetwalkers on the pavement. They might be zombies, but how does one tell with a prostitute?

0:30:26 Unfortunately, the actress (Sienna Guillory) they chose to play Jill Valentine looks like Jill more than she acts like Jill. Unless, of course, the real Jill Valentine is an emotionless blob of robot jelly, in which case Sienna’s portrayal is spot on.

0:34:06 I should probably mention there’s a trio of swarthy looking SWAT blokes I have absolutely no interest in, wandering the city.

0:42:18 Milla vs Nemesis, Round 1. Forget Nemesis–if my wee sister had a rapid fire super weapon like that, she’d be a bad ass as well.

0:45:51 The trio of swarthy lads is now a duet. They belong to the same Special Education Forces as those who didn’t go for a head shot. How do I know this? Because one of them was bitten by a zombie and doesn’t seem the least bit concerned. This is why America will fall first in the Zombie Apocalypse.

0:51:53 Weather girl just got eaten for school lunch because she didn’t know that you have to hear a person speak before you can be sure it’s not a zombie. Zombies should be obscene and not heard.

They infected you [with the T-virus] as well?

1:00:49 Running down the side of a building in slo-mo? Very cool, if anyone should ask.

1:06:34 How can you tell if a fight scene is well filmed? The shots don’t jump around more than the actors, and angles don’t change 3 times every 5 seconds. Ah, if only the director had been as clever as you and asked me this same question before filming this scene.

1:13:07 The evil head of Umbrella Corporation is left to be eaten by zombies. Just desserts.

1:17:45 Al K Hall has asked me to note any moment when Milla appears naked.

1:20:17 Milla fighting a room of people with only her right hand because she has to hold up a sheet over her boobs with her left is ridiculous.

1:23:15 She’s rescued by her friends but she’s been made into a traitor android zombie.