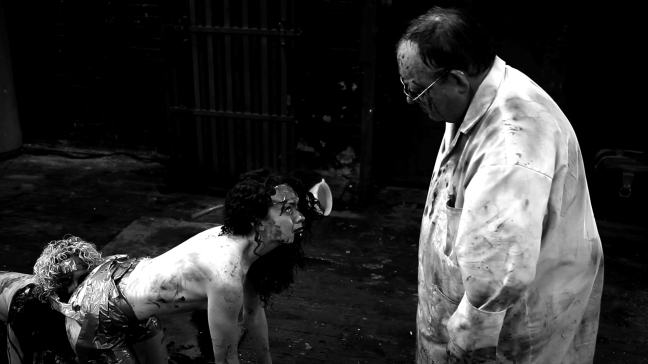 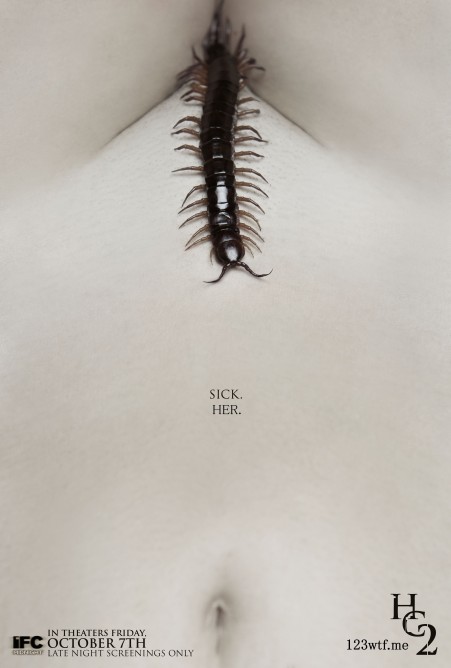 Warning: The subject matter of this film is not for anyone. The pictures used below are NSFW and NSFWTF (Not Safe for Whomever and Not Safe for WTF), proceed at your own risk. You Have Been Warned.

I’m in a darker place than my bed at 12:36am, and so I figured I may as well give Human Centipede 2: Full Sequence a look.

0:03:02 Some heavy, balding security guard (Martin) is watching the original film on his laptop. He’s black and white, as well.

0:04:21 Two English youths are in the car park, where the guard comes out to assist them with their locked car carrying a crowbar. They mock him. Here’s a tip: choose someone not wielding a crowbar when looking for someone to antagonize.

0:04:35 Oh, and by the by, the guard is also carrying a pistol. He shot boy Chav in the foot and girl Chav in the thigh. He who laughs last is probably carrying a loaded weapon.

0:04:50 The Guard kills the lad with a blow to the head with the crowbar. He apparently did not read his job description all that closely.

0:05:14 He does in the lass in the same fashion. This is also known as “taking out the white trash”.

0:06:38 Even if it looks as though they’re dead, the guard parks his truck beside them and duct tapes the girl’s wrists behind her back. Maybe she’s just playing dead. Like all the actors in Human Centipede 2.

0:07:04 There’s already another bound and bloody boy in the back of the van. Seems he’s starting a collection.

0:07:46 He’s got his own personal Human Centipede scrap book. #crapbook

0:09:09 Driving home with a van full of bound and bloody babe bodies. #booty

0:10:35 He goes to Hire-a-Warehouse and they conveniently cut the scene where he overpowers the much taller and stronger landlord. WTF!?

0:12:01 The guard’s cutting off the still mostly unconscious lass’s clothes. She’s got a nice bra. Maybe her mother told her to always leave the house with clean undies.

0:13:07 Martin the Guard receives a phone call from a Hollywood yank who tells him in yank-speak he’s not interested in a human centipede idea. We can’t help but agree.

0:14:39 We’re afforded a shot of this horrid little man at home, where his mother (or possibly his wife) comes in to berate him for having shit himself. Could there possibly be a reason for this other than filler (and I’m not talking about his pants)?

0:15:56 Not plumber’s crack–Psycho’s crack?–as the deformed guy walks around his bedroom in his sagging and soiled pants. You know the kid who you paid a shilling to eat his own boogers? Well, now he’s directing films. And you’ve paid to watch him yet again.

0:16:41 The psychiatrist who makes house calls has a beard which makes him more insane than his patients. He sits and watches while Martin the Guard observes a centipede he has in a terrarium. The centipede makes more noise than many people I’ve slept with.

0:20:22 At least the first film had focus. Here we’re just wandering around the film bored and waiting for a sign to give us direction. #stop

0:22:29 Martin has no problem getting three men tied up in a warehouse, but when one brute comes down because Martin’s mother banged on the ceiling to complain about the loud techno music, Martin gets thrashed like this film at the hands of film critics.

0:22:33 Everything is just so random. At least the first instalment had the decency to be kitsch.

0:22:48 He’s peeing blood from the neighbour’s beating, yet doesn’t have a mark on him. Maybe he’s hurting inside. (As are all those who choose to watch this abortion.)

0:29:40 Two dirty Essex girls walk through the garage, and the blonde peeps while Martin tugs on his own human centipede to Human Centipede 1.

0:37:35 Philosophical question: Can it really be called ‘acting’ if it’s just a bloke standing in front of a camera?

0:39:18 Martin sics his real centipede (the loud one) on his mother before beating her to death with a crowbar. This is one way to get her to open up.

0:42:58 In the magical car park where no more than one car at a time ever comes in, the doctor from earlier happens to be there having a three-way with another man and a prostitute in a compact car. #tightsqueeze

0:44:20 The biggest and serial WTF is that Martin knows just how hard to hit his victims with the crowbar so that they don’t die or suffer permanent injury, yet become unconscious for the exact amount of time he needs them to.

0:45:33 I seriously think they chose black and white after the film was already made because it looked too ridiculous in colour. #deadserious.

0:48:30 One of the actresses from the first film (Ashlynn Yennie) plays herself auditioning for a role in a Tarantino film. No alarms go off when she’s picked up by a man in a bloody coat driving a filthy van and who never speaks. Turns out there is such a thing as too dumb to live.

0:49:55 And she’s not surprised that the audition takes place in an abandoned warehouse. Please, put her out of my misery.

0:55:04 His method of anaesthetizing  them for the surgery is to clock them on the back of the head with a crowbar. It would seem Full Sequence is less ‘medically accurate’ than it’s inbred sibling film, First Sequence.

0:56:02 He knocks their teeth out with a hammer. One more thing I could have lived forever and not missed seeing.

0:58:02 Proving my point that crowbar anaesthesia is not medically sound, Martin accidentally killed the pregnant woman. And speaking of ‘sound’, his hearing is so good he can hear the foetus’s heartbeat in the dead mother’s womb.

1:01:53 One man bleeds to death after having his arse removed (arsectomy?). Again, I’d like to have a doctor’s opinion on most of this film. Unfortunately, anyone with any ounce of intelligence gave up on this film when they learned of it’s existence.

1:02:39 Martin staples mouths to arses for the centipede. How does that even work?

1:10:32 Ashlynn can no longer make a sound because he removed her tongue? How does the human body work again?

1:14:01 If you would just like to skip to the moment when they chain evacuate into each other’s mouths, it happens here, complete with sound effects. Who is more stupid, the actors who are paid to star in this or myself, who voluntarily watches it for free?

1:14:34 And now some of the waste leaks out down the backs of legs and fronts of faces. In all likelihood, I am the only person ever in the history of cinema to make it this far into the film.

1:16:31 Plot twist. The pregnant woman isn’t dead and she is now running through the warehouse, apparently about to give birth, judging from the liquid gushing out of her.

1:16:41 The triumph of the human spirit. She runs naked outside and steals a car while in labour.

1:19:30 So Martin shoots him in the head upon returning to the warehouse.

1:21:17 Out of bullets, he now saws through their necks with a dull blade as they crawl.

1:23:02 The last woman kneeling catches Martin off guard, punches him in the crotch, jams a funnel up his arse and drops a vicious centipede inside. Much like this film, centipedes are hard to digest.

1:23:18 He stabs the woman and has killer indigestion.

1:25:04 Seems all this was a dream because now Martin is back in his garage office, watching the first movie on his computer. The director has succeeded in doubly wasting our time. 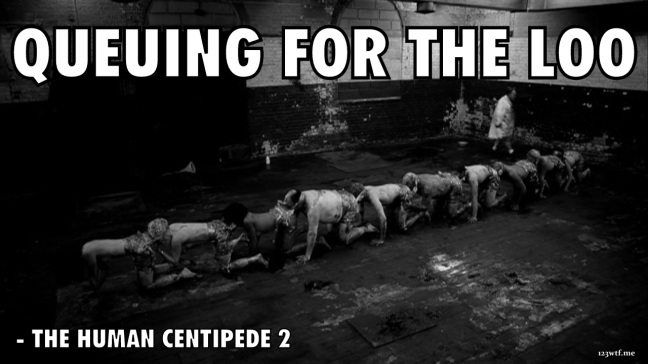 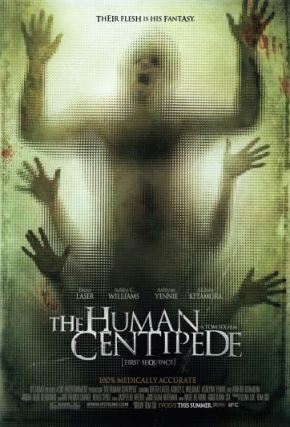 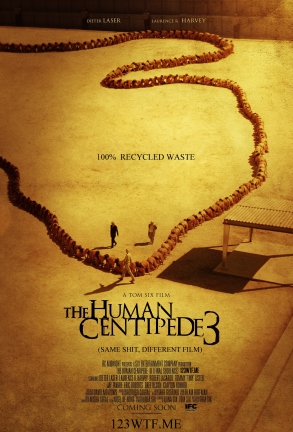