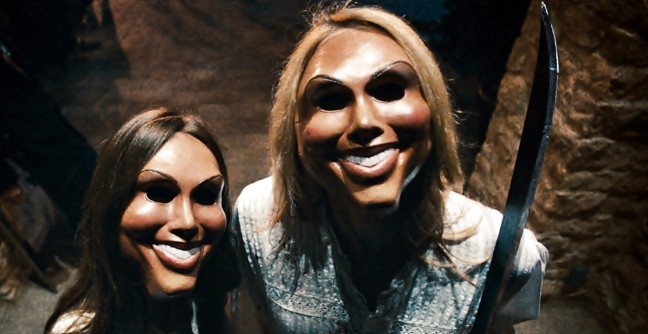 I shall be sorting through all the bits of The Purge, examining it in chunks and screening its creative juices. I will determine if The Purge is a horror binge or just lightweight fare, so read on only if you have already ingested The Purge, or don’t plan to.

0:01:48 In the year 2022, the New Founding Fathers are responsible for a new, Utopian America–and, apparently, the abolition of non-gender specific titles.

0:04:28 623 minutes before The Purge starts and it already feels like this was filmed in real time.

0:04:53 Ethan Hawke (a poor man’s Jude Law, but that’s all right, I’m a poor man) is an executive type married to the woman from The Game of Thrones [Lena Headey].

0:05:50 Science geek explains the reason for The Purge, as though we didn’t get it from the poster and as though we cared. Exposition through dialogue is the worst kind of both.

0:06:31 Romantic scene on the floor of an 18-year-old’s bedroom with her beau. As poorly written as it is acted–a scene so bad it turns me off romance like a smelly oyster.

You have to get home before lock down.

–Zoe, the 18-year-old daughter to her beau

Home is where the hard-on is, girlfriend.

0:07:09 Neighbour sharpening his machete with a table sander on his front walkway in the middle of the front garden.

You know your husband sold a new security system to almost everyone in this area. Some people are saying this neighbourhood paid for the new extension to your home.

Supposed to give us reason to believe the neighbours will Purge the heroes’ home, which is sad because 1) do you really hate someone for selling you something you wanted and 2) I’d hoped this would be a film showing The Purge in different locations all over the country and it looks like it will be nothing more than an intimate little Purge at Ethan Hawke’s home. If it’s nothing more than a home invasion movie, best watch The Desperate Hours (either the 1955 Bogie original or even the 1990 Mickey Rourke remake) instead.

0:09:54 Long close-up on little half burned plastic baby doll on robot wheels lets us know that Timmy (operated by the younger son, Charlie, from his secret hiding place behind a fake wall in his closet) will become a key plot element in this film that, unlike, Timmy, is running in the wrong direction.

0:16:16 An announcement of the National Emergency Broadcast System says the Purge will last until 7am. But isn’t the U.S. more than one time zone? WTF!? Did the New Founding Fathers do away time zones along with non-gender specific job titles?

0:17:42 Ethan is now re-explaining The Purge. I only ask they pay as much attention to plot as they do justifying it.

0:26:06 The little boy decides to open the security doors to the house because a stranger is asking for help from the street. When I was 10, my parents taught me to avoid strangers (and drunken priests). I guess strangers are safer during The Purge. #WTF

0:28:23 The stranger disappears in the house, so Ethan, mum and the boy run into a room and cover the door, but don’t bother to see if the stranger they lost is in the room first. WTF!?

0:28:51 Earlier there was a wardrobe chock-a-block with heavy duty weaponry. Now would be a good time to go and get some, wouldn’t it? Or is that only for emergencies…

0:30:53 The daughter calls out from a hidden corner of the house so the mum abandons her son to find her daughter, telling her son she’ll be right back, rather than telling her daughter to come to the safe room. There’s an undeniably rewarding sense of karma when stupid people are punished for stupidity.

0:31:44 As predicted, the neighbours are coming to the house loaded for bear because they’re jealous Ethan made money when they bought something from him.

0:34:33 I was mistaken, those in masks are not the neighbours (yet), but the obviously very slow youth who just now caught up with the black man the youngster let into their house. Apparently they have their heart set on killing this one man, and no other will do. If the family doesn’t force the stranger out of their home, the youthful band will break into the house (we’ve just learned from Ethan that the security system is fallible and he should know, he sells them) and annihilate the family along with the homeless gent. Whatever, as long as it happens soon.

0:48:20 Homeless chap took Zoe as a hostage and now there’s a stand-off in the bedroom between homeless and the homeful.

0:51:42 In a surprise moment of less boring, they duct tape up the bloke and he comes to before they can tape him to a chair so Ethan tells his wife to get the letter opener and stick it in Bloke’s wound. Which she does repeatedly, and in front of her tykes, until the bloke agrees to be taped to the chair for his execution. #courteous

You are making this much more difficult than it needs to be.

How difficult do you expect it to be, Ethan?

0:55:50 Zoe regains consciousness and tells her dad she’s disappointed in him and runs away. Homeless bloke changes his mind and tells Ethan to take him outside to save the children; but won’t get up and walk out himself. So, he’s into it, but not that into it.

0:57:14 Ethan has decided not to send Homeless outside but to break into his weapons cache instead and defend his family by arming himself and his wife. It’d be cute to see this scene filmed in England, where Mr Johnson opens the weapons’ pantry and hands the Missus and extra sharp potato peeler.

0:59:31 Homeless has to cut himself free. One would think Ethan might want some help from the man he trusts enough not to kill.

1:01:49 Ethan plugs one of the masked teens before he can shoot Ethan’s son. The rest of the youth walking through the house don’t seem to hear the screams or the gunshots. Let’s blame the loud rock and roll music, shall we? We do for everything else.

1:05:29 Ethan kills young love by killing a teen couple and then their mate.

But seriously, in a whole country where laws have ceased to exist, we’re to believe that this house has the most interesting action? Seriously?

1:07:54 Oh, plot twist! The neighbours have just shown up in reinforcement of the family! Could I be wrong about my prediction of the neighbour’s purging the family as well? #prollynot

1:08:51 Another scene where the reckless youth draw out the killing of a victim (mum this time) only to be shot at the last possible moment (this time by the neighbours).

1:09:38 Ethan is writhing around all over the place with a stab wound to the gut while the mum finds him and screams out for Charlie to join her there in the open. The family that dies together, stays together– in the cemetery.

1:10:14 Another scene where a reckless youth (Ring Leader yuppie) draws out the killing of a victim (mum, Ethan and Charlie) only to be shot at the last possible moment (by Zoe).

1:10:47 LOL, turns out there is a little comedy to this film after all. Charlie (all of eleven years old) straps his heart rate watch on his dying father’s wrist. This is a joke, right?

1:11:11 They listen to him die but cannot hear him wish the security system he sold was more efficient.

Don’t thank us too much, Mary. Truth is you’re ours, not theirs.

This film is like Miley Cyrus with six-pack of wine coolers: Too easy.

1:13:01 Blonde bitch explains that the neighbours are killing them because Ethan sold them a product they wanted to buy.

1:15:32 He kills one guy and has the other four untie the family. The four neighbours of the apocalypse stand in the entry way while the one Homeless man points a gun at them and asks mum what she wants to be done with them. Please note that not one of the neighbours makes a break for the door, three feet behind them. #Courteousest

1:16:07 She lets them go. I’ll wager neighbourhood barbecues won’t have the same ambiance from here on out, though. 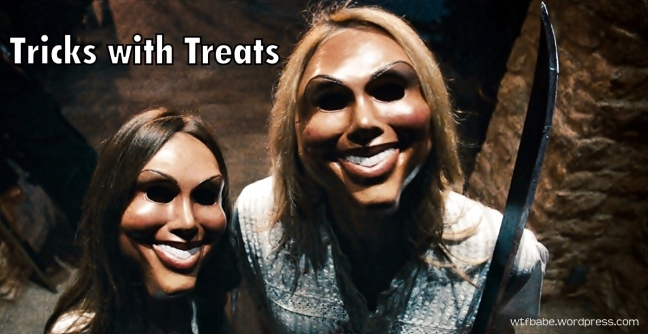 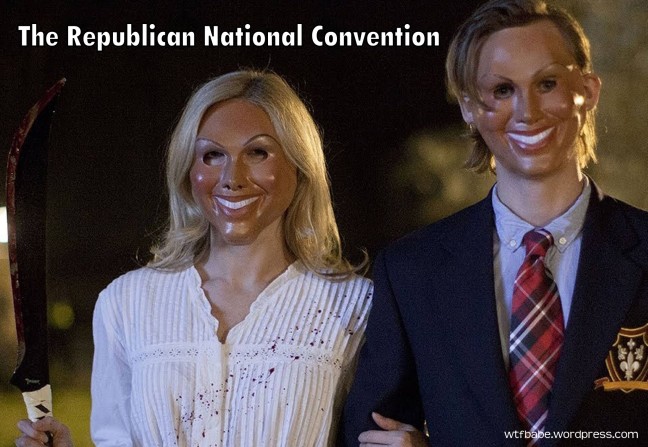 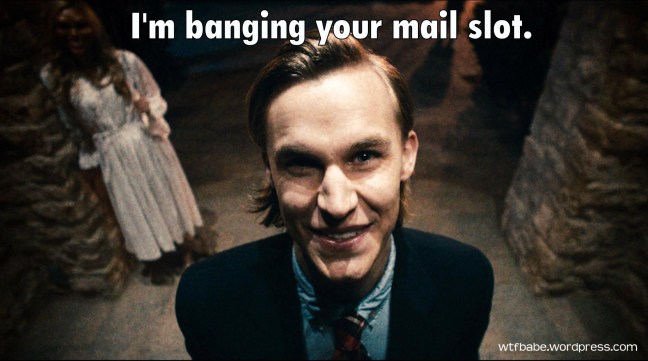 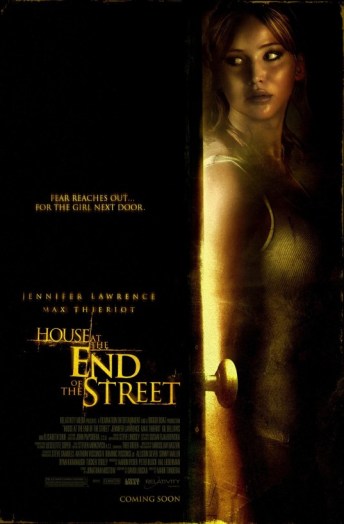