I shall be running a deep scan of Transcendence, analysing each byte and diagnosing its program to determine if it is one big error or a screen saver. So read on only if you’ve already seen Transcendence, or don’t plan to.

[On an international flight for my summer hols and I find this film on the entertainment screen, so subtract about 1 minute from each time to accommodate the airline’s intro.]

0:04:34 Flashback 5 years from that because this scene here would be too boring to actually begin with. Proving that point, Evelyn Caster (Rebecca Hall) and Dr. Will Caster (Johnny Depp) are the only things not dirty on a patio.

0:10:53 One of the Mara sisters (Loony Mara?) is in the audience while Caster gives a presentation on artificial intelligence, of which she is certainly a prime example.

Bloke in the audience: Dr Caster?

Bloke: So, you want to create a God. Your own God.

No. Not in the case of Justin Bieber / Meth / Internet Explorer.

12:42 The bloke from the audience shoots Dr. Caster. A lot. In the lobby and in the guts.

0:12:50 Bree (Kate Mara) looks back purposefully on the assassination as she walks away. The bloke commits suicide with a bullet and has a tattoo on his wrist that reads “unplug”. #ironic #ThinkAboutIt

0:13:15 There is a coordinated attack all over the country on computer research centres. Dr. Caster survives, without a scratch. WTF!? They must’ve unplugged him and plugged him back in again. Seriously though, where was he shot that he has absolutely no injuries at all? He holds his hand to his side so perhaps it was just a through and through. Or a booster shot. No, wait, a cheap shot.

0:14:14 Morgan Freeman is Joseph Tagger, a computer expert to whom Dr. Caster pays a visit. Tagger’s lab was annihilated by a poisoned birthday cake. Someone added too much dioxin.

0:16:04 WTF!? All of the AI labs in the US are destroyed and research is set back 10 years, and Will Caster doesn’t trust the government enough to give them access to his lab. The government (in the form of Cillian Murphy, the actor who played Scarecrow in Batman Begins), asks Caster if they can see his work on a project called PINN (Physically Independent Neural Network). When Caster asks,  “Do I have a choice?” and the FBI chap says,  “Of course you do”, does Caster repeat the refusal he’s just given only moments before? No, he gives them unfettered access to his computers. No doubt to show them the terabytes of WTF!? he has backed up.

0:17:52 Dr. Caster is back in the hospital because he has some sort of infection, says David Hodges from CSI (Wallace Langham as Dr. Strauss). From the way Will is stomach sneezing / driving the porcelain bus /calling God on the white phone, the infection sounds like it may have come from Jack Daniels (or an STD: Sipping Transmitted Disease).

0:18:41 Ah, the bullet was laced with polonium. Apparently Will is polonium intolerant.

We’re looking at 4, maybe 5 weeks before his system shuts down.

It sounds as though he’s already a computer. Evelyn Caster (Rebecca Hall) takes it well considering he’s as terminal as the tip of a battery at the end of an airport concourse.

Will: I need to get back to my labs.

Max: Will, is that really how you want to spend the last month of your life?

How would you like to spend your last month on earth if you were a rich doctor? Let us know in the comments!

0:21:31 Evelyn removes a lot of PINN’s circuitry and takes it to an abandoned building where she’ll work on merging it with Will because she saw a picture of a monkey with electrodes on its head. LAN of the Apes.

0:28:06 Johnny Depp with his head shaved bald and his skin all grey still looks better than I. Perhaps I should add a mortal dose of polonium to my morning cuppa.

0:29:48 Will’s friend Max Waters (Paul Bettany) and Evelyn are uploading Caster’s brain, scanning his head, and making him read a dictionary for his voice patterns. Soon he’ll be crashing early and crying for his mother board.

0:32:23 They pour his ashes in the river and Joseph (Freeman) begins  a long monologue about Will and Evelyn’s epic love. Frankly, I never saw it. For their entire time together on-screen, they looked more like lab partners than life partners.

0:35:42 The program becomes self-aware when Max and Evelyn turn it back on (they forgot to erase the drives). In other words, turning it off and on again works, even when helping computers become sentient.

0:40:01 Evelyn throws Max out because Max wants to take things slowly regarding letting Will on-line. Evelyn, on the other hand, is sure it’s Will’s brain because there are videos of his memories. If this film were about me, showing videos of my memories would be illegal in most countries.

0:42:48 Max is kidnapped by RIFT and taken to meet Bree. Before Bree can attack the computer storing Will, Evelyn gives him internet access, so now he’s more widespread than Jennifer Lawrence’s breasts.

0:46:31 Aw, that’s sweet. Will just made Evelyn richer than King Midas with Microsoft shares. She’s the boss of a town and owns it. Literally–she bought a city.

0:48:57 Will hacks surveillance cameras all over the country and squeals like a computer mouse by giving info on RIFT members to the feds. #PersonOfInterest

0:52:11 Bree and the rest of the RIFT crew that weren’t arrested go underground in a forest above ground. Kate Mara looks ridiculous with fake blonde hair, BTW, and like Diana Spencer marrying Prince Charles, no one knows why she decided to do this to herself.

You know, I used to work for Thomas Casey [the doctor who pioneered the brain / computer technology connection]. I interned for him. One night, he invites us all over to the lab, give us this whole speech about history. He hands out champagne, like he just cured cancer. And, you know, when he uploaded that rhesus monkey, I was actually happy for him. We all were. And then I realized, we’d crossed a line. The machine that thought it was a monkey, never took a breath, never ate, never slept. It just screamed. It was begging for us to stop. To shut it down.

Bree to her kidnapped Max

0:56:23 In voice – off, Max says that Pinwheel is power-hungry, and not just for electricity.

0:58:26 WTF!? OK, I must know, how does a computer light a candle? That said, if it can light a candle, it can certainly do other things to please Evelyn which would explain why she’s in love with her monitor. It’s not Her, it’s Him.

1:00:32 Fast forward 2 years. The town Evelyn and Will bought has a massive underground computer laboratory with a lot of matte work.

1:01:27 In the meantime, Will has cured cancer and Parkinson’s disease by figuring out a way to repair damaged cells.

Can you imagine having a disease named after you? Like Pauly’s disease: a discernible and irreversible sharpening of the tongue.

1:05:04 Oh no! That’s creepy. When Pinwheel healed the labourer (Clifton Collins Jr. as Martin), he inserted himself into the help’s body (on a cellular level, not a ‘Vaseline and a fag afterwards’ level).

1:08:21 Now they heal a paraplegic in the bunker. RIFT posted a video of Martin on-line to create fear and anger, but it backfired because now hundreds of people are lining up at the compound. It would seem everyone would like to have a little Johnny Depp inside of them.

1:12:08 Jennifer ‘JJ’ Jareau’s husband from Criminal Minds (Josh Stewart as Paul) gets his sight back and all I can think is, I’d be willing to have Johnny Depp inside me and he wouldn’t have to do anything.

1:15:32 WTF!? The FBI’s plan is to turn off the Internet? And blame this on the terrorists? Even if it were possible, Pinwheel has proven he can live independently of the Net, as he was born in an independent work station. If they uploaded Foodfight!, however, he might be turned off. [Seriously, an animated film with Eva Longoria and Charlie Sheen? WTF!?]

1:16:53 Oh no, the WTF is getting very deep. Max says the hybrids (the people Pinwheel cured, who are now networked) are operating on code he wrote, so he can hack into their brains. It’s at this moment I realize the trailer is all anyone ever needs to see of this.

1:23:28 It takes the hybrids quite some time to recover, however. The rebels don’t really have to stand there and wait for them to come back to life though, do they? “Hurry up and repair yourself so I can shoot you again!”

1:24:38 The rebels & FBI capture Martin to steal his source code and write a deadly virus.

1:31:28 WTF!? Pinwheel leaves his code out in the rain and the air and the water, so somehow every human who touches it will become a hybrid, and organic life will end. Which is not a big problem, as far as I can see, as ‘organic’ is really quite over priced and probably just a marketing scheme.

1:33:56 Bree is so deeply involved in the cause she’s only changed her top three times in the past 5 minutes. She’s into saving the world in style.

1:34:37 The rebel plan is to inject the code virus into Evelyn, so that she can upload it into Will. It’s an STD, where ‘S’ stands for ‘Shareware’.

1:35:06 Will found a way to make himself a physical man again. Apparently we don’t need to know how. I’m just busy admiring this film’s stubborn refusal to end.

1:44:53 WTF!? Bree threatens to kill Max if Will doesn’t upload the virus but

1:47:58 Will uploads the virus and all the hybrids deteriorate like raw meat on the window sill.

1:50:49 This phone would probably be abandoned even if technology wasn’t gone forever.

1:51:58 WTF!? The happy ending is that Evelyn and Will are still together living as code in rain water? So the scheme to destroy technology worked, but it spared only this the couple and turned Will into a drip? 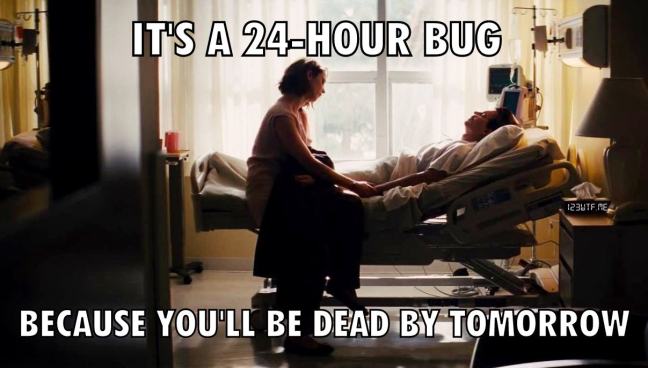