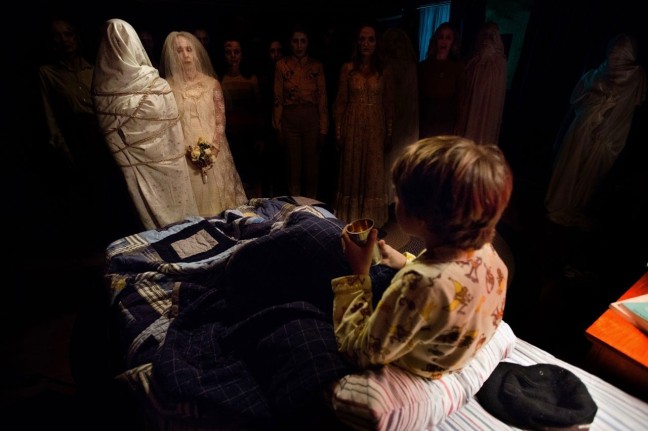 I shall be interrogating Insidious: Chapter 2 in incredible minutia, inspecting it intimately, and investigating its inception to interpret if it’s inspirational or insipid. So read on only if you’ve already seen Insidious: Chapter 2, or don’t plan to.

For those of you who missed the first one: a 10-year-old lad could astral travel in his sleep, but when he did, he abandoned his body and an evil spirit wanted to take the body for himself. A medium came and told the boy’s father the same thing happened to him as a child, only it was an old woman ghost chasing him. At the time, she made him forget the ghost and the astral travel; but to save his son, the medium hypnotized the now-grown father so he could go to the dark side and rescue his son. While there, however, the old woman’s spirit possessed the father’s body and when it came back to this world, it killed the medium.

0:01:46 Lambert residence 1986: The film begins with a flashback, when the mother from Insidious was so attractive she wasn’t even the same actress (Jocelin Donahue instead of Barbara Hershey as Lorraine Lambert).

0:02:05 Wow. Evidently the film is set in a time before good acting. They’re so wooden, they make Pinocchio look flaccid.

0:04:50 The medium (Lindsay Seim as the young Elise Rainier — interestingly enough, I think the original actress, Lin Shaye, is dubbing the voice), hypnotises young Josh by showing him the intro to this film. #kidding

0:09:13 Elise the Medium explains the whole concept of the film to the mother, about how young Josh can travel at night and see things he’s not supposed to. Now a parasite ghost has seen him and followed him back to his body like a sick puppy that refuses to stop psychically humping his leg. #AuralSex

0:10:14 Elise says she will erase Josh’s memory of these events so that he will forget how to astral travel. I use gin for this purpose.

0:13:27 The film flashes forward to moments after the end of Insidious, with Renai Lambert (Rose Byrne) telling a police officer someone in her haunted house killed Elise. He doesn’t believe her, so she punishes him by repeating the back story.

0:15:05 When her husband, Josh (Patrick Wilson), enters the scene later, he acts as though he’s returned to his normal self. But make no mistake, he is still an evil transvestite who’s just strangled a psychic. [Note: Because the old woman ghost from Insidious is a cross-dresser. #Seriously]

0:16:37 Josh and Renai go to his mother’s house, where Lorraine (the Barbara Hershey version) is babysitting the boys. The police apparently don’t have enough evidence to prosecute Josh, but the ghosts have enough to persecute him.

0:18:11 In a random moment of WTF!?, the younger lad chooses this moment to show his brother a can & string telephone that will be useful when those in The Further want to talk to them without the roaming charges.

We have our son, isn’t that what we should be focusing on?

No, you should be focusing on not killing him and the rest of your family, possessed dad.

0:23:52 Elise’s Laurel and Hardy assistants (Leigh Whannell as Specs and Angus Sampson as Tucker) go to Elise’s house because someone thinks this film needs to be longer. To decide who investigates, they play ‘Hunter, Ninja, Bear’. The game resembles ‘Paper, Rock, Scissors’, where Bears beat Ninjas, Ninjas beat Hunters, and Hunters beat Bears.

Dalton: There’s someone standing behind you.

She walks around the house turning on eerie lights rather than running out of the house screaming little girl screams. Like I would.

0:35:19 The ghosts in the house start playing with children’s toys. They just might be as bored as we are.

Tucker: Elise said you were the second best person she ever worked with.

Not as generous as ‘First best’.

0:39:10 Carl uses Boggle to communicate with the ghosts. Because ghosts are crap at Scrabble.

0:42:46 Josh finds Renai unconscious on the living room floor and begins sniffing her. Either he’s possessed or he’s a dog.

0:43:22 Elise has led Lorraine, Specs & Tucker, and Carl the Medium to an abandoned hospital where Lorraine used to work. Furniture and medical equipment were left in random places around the corridor by whomever was last to leave. There’s also a working child’s doll that says ‘Mamma’ when you step on it, although this may be a sort of ghost doorbell to let evil know you’ve arrived.

0:45:19 In a room full of ghosts, Barbara flashes back to when she was a doctor at the hospital and not yet a good actress. She took her son, little Josh, with her on rounds and ignored him after telling him to be careful. This is why an old dying man leaps from his bed and tries to kill Josh for pressing the buttons on his life support.

0:46:11 The old geezer [Tom Fitzpatrick as Old Parker] dies and takes the lift with young Lorraine. I’d imagine if your spirit takes the elevator after death, heaven is not your ultimate destination.

[Note: The old man is a serial killer, and we shall soon see his victims stored in a room in his house. He became a serial killer because his mother dressed him as a girl when he was a child. #drag He kills himself after seeing young Josh in the hospital, because he feels Josh’s young body is ripe for  possession.]

0:47:20 Back to real time, Lorraine tells Specs & Tucker that the old man was in ICU for trying to castrate himself, but she doesn’t say why. Maybe he wanted to pull a Van Gouge.

Ghost mum: Your dead soul is killing its living skin.

Ghost mum: Only if you kill them.

Possessed Josh: I can’t, mother. Please, don’t make me do it.

Ghost mum: You must, or you’ll waste away.

Exposition like is what changes a Horror film into a Horrible film.

0:48:44 WTF!? The closed hospital left all its patient records behind for anybody to take? I’m starting to see what was insane about this asylum.

0:49:07 Renai regains consciousness with a bang. The loud noises are helping me stay awake as well. Renai asks Josh where the baby is, but not why didn’t he take her to the hospital if she was unconscious for several hours. Or why did he leave her in a pile on the sofa like a sack of charity clothes.

All you have to do is ignore them and they will go away.

Josh tells Renai the ghosts are like other people’s kids.

0:52:36 Lorraine, Mickey & Mini, and Carl the Medium break into old dickless’s abandoned house. What always amazes me in the film world is how much furniture, fixtures and material people just leave behind when they abandon a place.

“What about Uncle Dick’s antique end table and Tiffany lamp, should we take them?” “Nah, leave them in case a movie is made here in a few decades.”

[Note: This house belonged to the serial killer and his mother.]

0:54:30 They enter a child’s fully equipped bedroom and Specs says it can’t possibly be the old man’s childhood room because it’s too girly. He forgets the old man tried to make himself rid-dick.

You can’t be in here. If she sees you, she’ll make me kill you.

If a ghost tells you this, take the hint.

Carl the Medium: Who are you? [Then, reading his letter dice,] ‘Mother of Death’.

Tweedle Dumber (Tucker): What does that mean?

It means I hope you die next, so we have a little less stupid in the world.

1:03:31 Whoa, behind a bookshelf they find a secret room full of seated dead corpses covered with bloody sheets. Like a mosque where the women were bored to death. In this room is a chest with newspaper articles about a ‘Bride in Black’. This is the ghost that possessed Josh at the end of the first film, and the one responsible for murdering all the women under the sheets. Except it isn’t a woman at all, but old man Parker cross dressing. Like Master Bates, in Psycho.

1:14:39 Josh tries to stab Carl but when Specs & Tucker interrupt him and Josh subdues all of them, he decides he doesn’t want to kill anyone any more. One of those cases of, I’ll only try to kill you when I can’t kill you.

1:15:28 Wait, Carl is in The Further with Josh and Josh tells Carl that he’s dead. Hard news to wake up to.

1:21:40 Old Josh is going to go ask young Josh how to get to the Bride in Black’s house so he can send her to hell. This will also explain how old Josh can be in the video of young Josh’s hypnotism. But doesn’t explain why I should care.

1:23:47 WTF!? Lorraine and Renai think it’s safe to go back Josh and Renai’s house, when in fact possessed Josh has taken it over like a vacant soul squatter.

1:25:41 Lol, the boys get dropped off by some stranger who leaves then at the kerb of a dark house without verifying if anyone is home. The lads will be scared for life seeing their dad beating their mum with kitchen utensils. Then scarred for life.

1:26:44 The boys surreptitiously sneak into their own house, cloaked by all the WTF!? and watch their dad threaten their mum before slinking away to find a baseball bat and furtively beat their father with it.

1:27:13 They run into the basement, the same place real Josh occupies in The Further. They’ll meet for a quick coffin break.

1:29:18 Oh dear god, the scene where Mrs Parker [Danielle Bisutti] punishes the cross-dressing child for signing a drawing with a boy’s name is so far over the top I have a nose bleed.

1:31:05 WTF!? To fetch his father in The Further, Dalton falls asleep sitting up on the basement floor in a house full of ghosts with his father pounding on the door with a fire extinguisher, trying to kill him and his mother. It’s apparently much easier to put children to bed than I’ve been led to believe.

1:35:13 Elise is beating Mrs Parker with a hobby horse in The Further, and it’s having an effect on Josh in the real world — even though Josh is possessed by the son and not the mother? WTF!?

1:35:53 Carl isn’t dead, which means no one has died in this film and explains why I’m so sleepy.

1:37:04 Once Dalton finds his father in The Further, he uses the can-phone to talk to his mother in the cellar. The scene is so ridiculous I lol.

1:39:19 Carl the Medium helps Dalton and Josh forget their experiences. I’d like him to do the same for me and this film, please.

1:40:14 Kermit and Piggy (Specs and Tucker) go to the house of young lady in a wheelchair, accompanied by the ghost of Elise to set up a sequel.