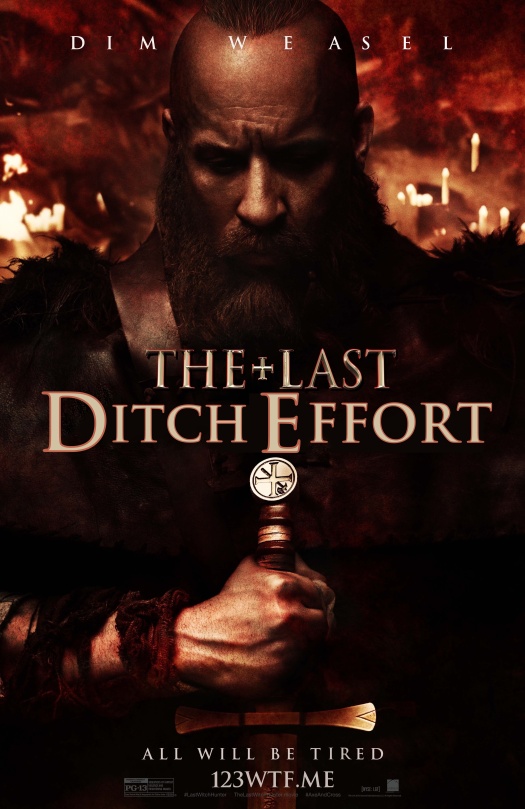 I’ve chosen to review this film because it’s like me: a low hanging fruit.

0:01:58 A group of slovenly blokes walks through an olden day snow-scape. By the looks of some of them, the torches aren’t the only things that are flamers.

Be warned, brothers. She [the Witch Queen] will never truly perish until her heart beats its last.

Beware of stating the blooming obvious, you mean.

0:07:52 Kaulder (pronounced like the opposite of ‘hotter’: Vin Diesel in a wig) kills a scabby witch (Julie Engelbrecht) beneath a tree with a light sabre-like flaming sword. As she dies, she curses him with eternal life (and probably bad acting).

0:11:48 In modern days, Kaulder (a now bald Vin Diesel) prevents a plane crash by confiscating a young witch’s (Bex Taylor-Klaus (from Scream: The TV Series )) runes that are creating a terrible storm. If she were a real witch, she wouldn’t need a plane to fly.

0:12:58 Dolan #36 (Michael Caine, who is in this film because, like a tyke who eats boogers for change, he’ll do anything for a few quid) explains that witches are allowed to live amongst us if they don’t use their powers against humans. Thus Donald Trump is fair game.

0:13:22 Before speaking, Father Dolan must wait for Kaulder to finish the flight attendant he met on the flight (Inbar Lavi as Sonia).

Are you reminiscing about the Ludwig affair?

Father Dolan asks because Kaulder is listening to Beethoven

Leave it to Vin to have an affair with Beethoven… Paul Walker must be rolling in his grave.

0:14:28 In a world where learning doesn’t equal caring, we learn Father Dolan is retiring.

0:16:57 Dolan #37 is Elijah Wood and I suspect he will turn out to be evil. Or maybe I’m just busy remembering him from Sin City.

0:19:14 To demonstrate his new role, Father Dolan #37 gets a cross burned into his arm for his pains.

That silence you hear is the sound of no one laughing.

0:28:28 Someone lures a kid by leaving gummy bears in a line on the pavement. Because kids love nothing more than sweets fresh off the sidewalk.

0:29:11 It would seem the candy tree scenario was a hoax orchestrated by a paedophile warlock. That’s a bloke who would enjoy playing with Harry’s magic wand.

0:30:41 Kaulder traps a scruffy perv by throwing a knife into his leg, then pounding the back of the knife so the tip sticks into a board and holds the prick there. Finally, something as cool as it sounds in this film.

You look like a terrible band from the 80s!

Ellic Lemasniel (Joseph Gilgun), the warlock that killed Michael Caine, to the council of witches who will judge him

He’s so right that I pity the costume designer.

0:33:37 While Kaulder whines about not interrogating the prisoner (and why didn’t he?), Dolan #36’s fancy pen grows into a dragon fly the witches put in a tree to power it. That’s one way to draw flies.

This reminds me of the other films with vagina monsters:

or Tranformers: Age of Extinction

0:35:44 Turns out Dolan #36 is a lot like Michael Caine in that neither are dead, though they both look like it.

0:36:08 Kaulder and Dolan #37 have two days to break the curse by killing the witch that placed it. Though I suspect Michael Caine is praying for death as a way out of this film.

0:44:22 Kaulder awakes from his memory to see that Chloe has handcuffed him to the floor and called the Orson Welles with the hipster beard warlock (Ólafur Darri Ólafsson as Belial). He’s the one who placed the curse on Dolan #36, but he escapes before Kaulder can kill him. Kaulder is actually more of a ‘witch runner after-er’ than ‘hunter’.

0:46:44 WTF!? Chloe berates Kaulder because the warlock destroyed her bar. Maybe she shouldn’t have handcuffed Kaulder and called the warlock, then. It would seem even witches can be real witches.

0:53:16 Kaulder and Chloe begin to fall in love, because what would an American film be without romance – other than better?

0:58:50 Kaulder went to see Danique (Dawn Olivieri), a top model witch, who tricks him by getting him lost in memories of the time he had hair. Chloe the ginger snaps him out of it. This is the second time he was nearly killed whilst looking for a memory. His memory isn’t just bad, it’s evil.

1:00:27 Chloe destroys the amulet that kept Danique young, and Danique’s looks fade like a Londoner’s tan.

1:05:57 As she’s a Dream Walker (and she’d need galoshes to walk through mine), Chloe takes Kaulder back to the intro scene where he nearly died and became the Last Witch Hunter. Once there, Kaulder learns the Dolans have keep the Witch Queen’s beating heart alive because it’s linked to him. If they destroy the heart, they also destroy Kaulder. Kaulder is getting warmer.

1:07:58 Belial wants to find the heart so he can resurrect the Queen. I can’t help but agree, the world needs more queens.

1:09:51 Belial ties Max (the blind bug dealer warlock) to a tree. When Belial puts the Queen’s heart in the dirt at Max’s feet, CGI roots cover him. Max will no doubt grow from this experience.

Chloe: This isn’t who you are.

Too bad that’s not a screenwriter.

1:14:34 Kaulder kills Belial disguised as Chloe (a wolf in bird’s clothing), but this gives the Queen the opportunity to grab Kaulder by his heart. My question is, why doesn’t the Witch Queen kill him here? Could it be their mortality is linked? Or could it be stupid?

1:15:18 Michael Caine Dolan comes back to life because Kaulder killed Belial and the curse is lifted. Caine looks as though he’s your gran made of gruel.

If I get hurt now, I stay hurt.

I repeat my question, why didn’t the Witch Queen kill Kaulder when she had the chance? WTF!?

1:20:14 Chloe must get into trapped warlock Ellic Lemasniel’s head in order to stop the linking of brains that will allow all witches to escape. I think we need not worry, there are not a lot of brains being used here.

Hey, be careful in there.

Kaulder to Chloe as she prepares to enter Ellic’s dream

Now is a little late to start with the jokes.

1:21:52 The vagina tree is the Sentinel, a sort of guard in the Witch’s prison, and it wants to attack Chloe and Kaulder because they removed a prisoner from the cave wall. It may just be a tree guard now, but it’s branching out.

1:24:47 The unified witch chanting ceases because when Chloe killed Ellic in his dream, he died in real life. Hmm, that would be a good idea for a film! Oh wait, it was already made…in 1984, over 30 years ago.

1:28:02 WTF!? Remember the prediction I made about Elijah Wood being evil? It’s not easier being smarter than the movie. Especially when Elijah Wood Dolan could’ve killed Chloe after Kaulder left them to find the Queen, thus saving the Queen’s witch army. Or he could’ve killed the newly mortal Kaulder when he was fighting the Sentinel. It’s as though we all stop trying at some point, but for the people involved with this film, that was at the very beginning.

1:29:18 The plague is released while the Witch Queen brainwashes Chloe into participating in the chant. There might be a lot of bad in this film, but this scene isn’t.

1:30:34 The Witch Queen kills Dolan #37 with flies because he’s a witch with no magic. She’s the type of woman who will abandon you as soon as the magic is gone.

1:33:14 Kaulder kills the Queen by throwing a sword through her and all the flies [see 1:29:18] drop dead. I wouldn’t want to be the bloke in charge of mopping up that ecological disaster.

The Axe and Cross betrayed me.

Here Kaulder refers to the organization of priests who protected his immortality. As betrayals go, this is far less than the one perpetrated on those who paid money to see this film.

1:37:44 A pale version of “Paint it Black” (by Ciara) ruins the enjoyment of this film ending.

1:45:58 Lol, it was filmed in Pittsburgh, Pennsylvania made up to look like New York. 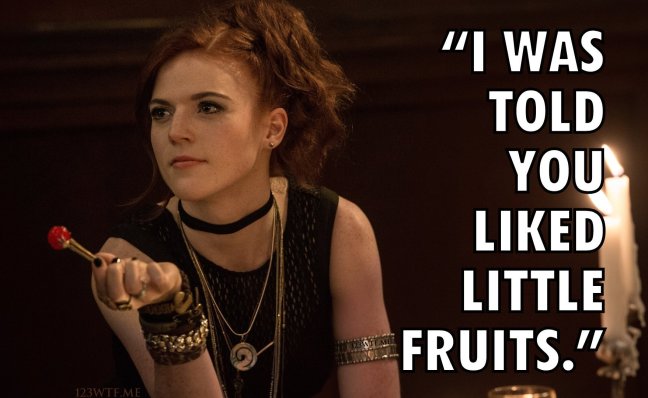