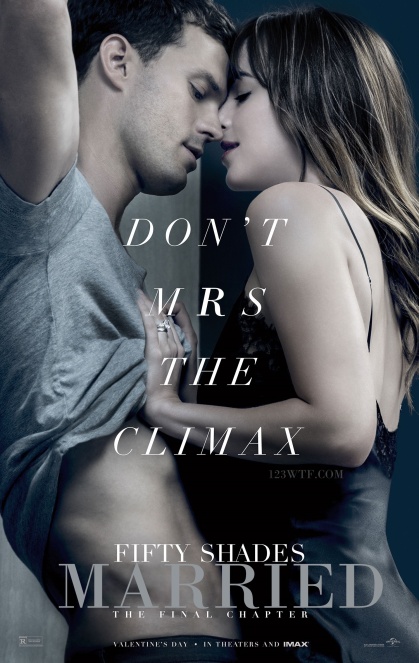 Fifty Shades Freed (The Final Chapter): It’s always a bad sign when the film’s title assures you there won’t be any more sequels.

0:00:51 While I reviewed the first Fifty Shades, I missed the second. This one begins with Anastasia (why do I always think her surname is ‘Boudoir’?) preparing to marry Mr. Grey. Meaning neither of the characters died in the second film, unlike the careers of the actors portraying them.

0:01:06 At the wedding ceremony Anastasia (Dakota Johnson) and Christian (Jamie Dornan) exchange vows. For this couple, these are a new sort of ‘ties that bind’.

0:01:28 The subtitles that came with my copy are going to be my favourite part of this film.

The actual line was “To love you unconditionally”.

0:03:52 Immediately following their wedding, the couple jet off to Paris and… attend an opera. So, it would seem that torture is still very much a part of their relationship.

[🎶 The song accompanying their bliss montage is Hailee Steinfeld, ‘Capital Letters’. The entire playlist is at the end of this synopsis.]

0:06:08 Christian tells her her bikini is too revealing, which exposes the plot line of jealousy as clearly as a tan line. Uh-oh, trouble in paradise. Or at least in Nice.

0:06:56 Meanwhile, in Grey’s publishing company, a man with a visitor’s pass can use utility closets where he can change into workers clothes and can use an obvious electronic box to visibly access the computer room and can attach a huge bomb to the server. Grey’s company is as secure as a starlet’s Icloud account.

0:08:51 Anna’s safe word it’s ‘red’. Easy to remember, it’s the colour of my face while I watch this embarrassing sex scene.

0:11:11 On the video surveillance footage, Anastasia recognises her old boss as the culprit who stole data and set fire to the mainframe. His name is Jack Hyde, and with a name like that, why did they need to investigate?

0:14:06 Anna insists that the maid leave so that she can cook dinner herself.

Christian: I could get used to this.
Anna: Well, we’re kind of married so you might have to.
Christian: I mean, you in my kitchen.
Anna: You mean, barefoot and pregnant?

WTF!? Again, she insisted on cooking dinner herself. I see the torture scene is continuing. What’s his safe word? ‘Divorce’?

[🎶 The song playing in the background is David Bowie’s ‘Young Americans’, which is not on the official playlist but is on mine.]

0:14:32 Because this film is about the inconveniences of marriage and domestic spats, Anna and Christian are now squabbling about wanting children. Turns out she wants one and he is one.

0:17:08 Anna returns to work and learns she received a promotion in her absence. Apparently, she works better when she’s not there. Of course, there is the jealous office mate (Amy Price-Francis as Liz), which makes sense because if my boss’s boss’s boss robbed me of a promotion for his sex partner who didn’t even go to work, his arse would be Fifty Shades of Sued. Obviously, Liz is going to try and get revenge later because this movie isn’t a steamy sexual drama, it’s an overlong episode of Sex and the City.

0:18:12 Oh yes, I forgot to tell you… There’s going to be more bickering over the fact that Anastasia wants to keep her maiden name, ‘Steele’. That’s why I refer to this movie as Fifty Shades of Married.

[🎶 The song playing while he refuses to let her drive his car because she’s a girl is ‘Big Spender’, by Kiana Ledé feat. Prince Charlez.]

0:21:41 Introduce Gia Matteo (Arielle Kebbel), an architect who wants to destroy Anastasia and her dream house, and seduce Christian while Anna watches.

0:23:42 Wow, Anna’s stance on her last name didn’t last long. Now she insists the architect call her ‘Mrs Grey’, because the only real reason for a woman to take her husband’s name is to wear it like a cattle brand around the other heifers. 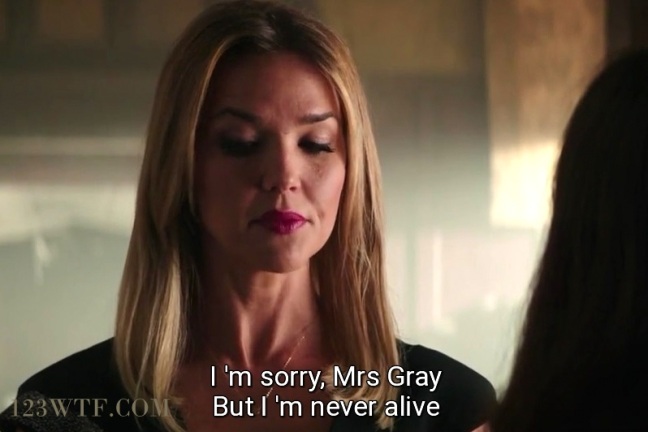 [🎶The song playing while Anna loses the SUV tailing them is ‘The Wolf’, by The Spencer Band.]

0:28:14 Anna gets so excited eluding her pursuers that she has sex with Christian in an outdoor car park. I wonder if she got rear-ended…

0:31:08 While looking for the haircut shears he keeps in his desk (WTF!?), Anastasia finds a loaded gun. I’m surprised she’s surprised, besides the gun is for close shaves.

[🎶 The song playing while Anna gives Christian a sex haircut is ‘High’ by Whethan (& Dua Lipa).]

0:38:26 Mr. Hyde holds Anastasia at knife point after surprising her in her flat (there is apparently no security in the U.S. for rich people, judging by how easy it is to access Christian Grey). Her security detail take him then but have nothing with which to restrain him, so Anna says,

We do. Uh…we…I mean, I think I can find something.

Yes, but maybe your body guards mean something without fur.

0:40:04 Christian pouts like a 4-year-old not because Anna was almost killed, but because she’d told him she was going straight home the night before, though changed her mind and had drinks with a friend instead. Want a little ‘passive’ with that ‘aggressive’, Christian?

[🎶 The song during the sex scene in the torture room at 43:21 is Bishop Briggs’ remake of the INXS ballad, ‘Never Tear Us Apart’.]

0:45:12 Christian pretends he wants to make love to Anna but really it’s just revenge torture. She’s all put out, as though she didn’t know that’s what marriage is. [Fifty Shades of Married]

0:48:52 Christian rich-person surprises Anastasia by jetting all of her friends to their new house in the forest. Rich people don’t have makeup sex, they have makeup success.

[🎶 The song Christian plays on the piano is the Paul McCartney song ‘Maybe I’m Amazed’ as covered by Jamie Dornan (Christian Grey). It’s on the playlist after this synopsis, as is the (far superior) original version.]

0:50:58 After bath-gossip with Christian about how his brother’s a slut, Anna dreams Mr. Hyde kisses her in the Versailles Palace. If she tells Christian about it, maybe he’ll buy it for her. That would be one way for them to get a little class in their lives.

0:52:16 Anna and Christian have sex with ice cream and we understand now why they’re so frigid.

[🎶 The song playing while Anna and Christian do disgusting things with food is ‘Heaven’, by Julia Michaels. See the playlist.]

0:57:28 While shopping in town, Anna sees her brother-in-law acting friendly with Gia the architect and assumes it means he’s sleeping with her, thus cheating on his fiancée and Anna’s friend, Kate. Of course, I’m sure he’s just preparing some sort of surprise for Kate with Gia’s help, but first there had to be a huge to-do because this film is basically a Friends’ episode, only not as funny, interesting or even as sexy.

[N.B. Even worse…nothing ever comes from this scene, making us wonder why they included it in the first place.]

[🎶 The song playing while they’re falling asleep in the club (or maybe it’s just me) is ‘Come on Back’, by Shungudzo. It’s on the playlist.]

1:05:04 Anna’s gynecologist informs Anna that she’s pregnant. Apparently she wasn’t throwing up simply because she was in this movie.

1:06:28 Fair play to the film, Anna tells Christian about the baby right away rather than keeping that bun in the oven for a more dramatic moment.

[🎶The song playing while Christian pouts this time is Sia’s ‘Deer in Headlights’. On the playlist.]

1:09:52 Christian storms out and returns drunk. He passes out so Anna goes through his phone [Fifty Shades of Married] and finds a text from an ‘Elena’: “Good to see you tonight. I’m here for you, anytime.” I wouldn’t worry if I were Anna, there are no “Elena’s” in the cast.

[🐣 Easter egg: Kim Basinger was meant to reprise her role as the mature woman who introduced younger Christian to sex, but all of her scenes were cut from the final version.]

1:10:54 Anastasia is so upset she sleeps in the Red Room. I guess this means she’s torturing herself.

1:15:27 Big fight over the baby and the fact he left the night before to get drunk with his ex [Fifty Shades of Married]. Obviously, if there’s a sequel they’re going to call it Fifty Shades Breed.

1:17:43 While Anna’s at work feeling sorry for herself, she gets a call from Mr. Hyde who’s kidnapped Anna’s friend Mia to use her phone. He may not have free time, but he does have free minutes.

1:20:45 Mr. Hyde calls Anastasia and tells her to pack a lot of bags for the 5 million dollar ransom. She’s packing more than that.

1:22:02 Anna Grey runs into a bank with a gun in her waistband and tells the manager she needs $5,000,000 in cash stuffed into bags and she doesn’t have time to wait for procedures. The bank manager’s response?

Bank Manager (John Emmet Tracy as Troy Whelan): Do you have identification?

1:25:04 This scene is meant to be suspenseful but the WTF keeps getting in the way. She calls the kidnapper because Christian and all the bodyguards are on their way to the bank (the bank called Christian about the withdrawal). Hyde tells her there’s a car parked for her in the alley. Not only did Hyde hide a car there the day he was released from prison on bail, he also had the money to buy it and knows exactly which body guards are storming the bank while he’s hiding under a bridge. If Hyde doesn’t get the ransom, he could start a career as a psychic.

1:26:02 Ah, things are clearer. He had help arranging this. Who? Remember back at 17:08 when I said Liz would do something to get revenge on being skipped over for promotion? She decided to cast lots with Hyde. It would seem HR does a shite job in Grey Publishing, as everyone they hire is a psychopath.

1:26:38 Knowing they were going to ask her to ditch her phone, Anna had borrowed the bank manager’s so that was the one she dropped out of the window when Liz told her to. That way, she kept her own phone and Christian can follow her with his stalking app.

1:28:32 While waiting for the approaching cops, Anastasia decides to shoot Hyde in the leg.  She hated the idea of leaving the flat with a gun and not using it.

1:28:42 She pretends to be unconscious when the police arrive 30 seconds later. She’s had a lot of practice faking things.

1:31:46 Because she ‘almost died’, Christian decides he wants the baby. If that’s what it takes for him to agree with her, Anastasia’s future is looking pretty grim.

1:35:37 Because they don’t want the torture to end just yet, Christian also learns who his mother is and he goes with Anna to see her grave. They can’t see her rolling over in it.

[🎶 The song playing while they leave the graveyard is Ellie Goulding’s ‘Love Me Like You Do’, which has a fairly necrophiliac edge to it in a cemetery.]

1:36:18 The song continues into a montage of their relationship and I’m thinking how much time we all could’ve been saved if we’d only watched this instead.

1:38:44 Anna throws Christian a pity party in the Red Room and the theme is ‘Come quickly’!

1:39:04 [Credits scene] We see Christian playing with their son [Theodore Raymond Grey, according to the IMDb trivia page], while Anna sits on the ground, pregnant with their daughter Phoebe. Or maybe it’s just from too much rich food.

[🎶 The song playing while the baby runs is ‘For You’, by Liam Payne and Rita Ora] 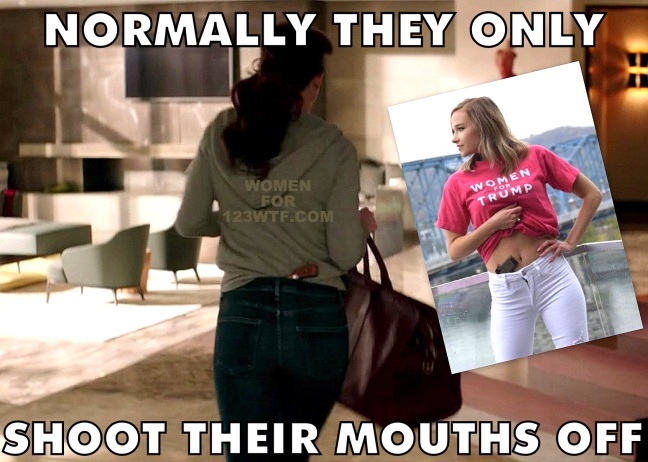 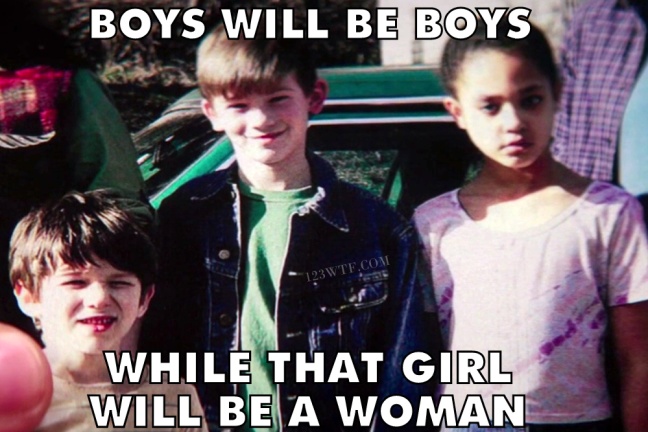